Early in 2015, I was invited by Eric Ellis to look over a forest clear-cutting operation a few miles east of City of Cheboygan and just a little south of Lake Huron’s shoreline. Eric is a wildlife biologist for the Ruffed Grouse Society and helps guide habitat restoration and management projects in Michigan, Ohio and other locations. The contradiction inherent in a dedicated wildlife conservationist helping to guide a forest clear cut suggested the right kind of dissonance for the opening of a radio story. The story play

For many of us, the term forest clear cut raises some horrifying images of denuded mountain slopes or those thousand-acre scenes of tree stumps and slash. Referring to sites in California, the Sierra Club said, “Clearcutting is an extreme form of logging that replaces natural forests with tree plantations . . . ” And, of course, that can be all too true.

What Eric wanted to show me was nothing like the single-purpose, forest clear cut of environmentalists’ nightmares. Rather, this is a pattern of 7 – 10 acre cuts in different locations through a large tract of woodland designed to re-create patches of young forest habitat. It’s a big project with the costs split between the land owner and the U.S. Fish and Wildlife Service (USFWS).

The problem, Eric says, is that American Woodcock populations are declining all across the country and have been since 1968 (1% each year). And the cause of this decline is loss of adequate habitat – specifically, young forest habitat. Woodcock, yellow-winged warblers, chestnut-sided warblers and many other migratory birds look for dense stands of young alder and aspen to rest and feed in during their migrations. Young forests also offer year-round cover and food to ruffed grouse. Warblers, woodcock and a host of other animal 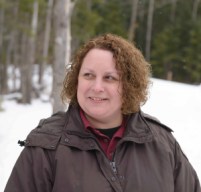 s (including deer) are rely on this habitat seasonally.

As described by Heather Rawlings, a wildlife specialist with the USFWS, the cut is designed to create or re-create the kind of habitat American woodcock, grouse and many species of warblers need. Dense stands of young alder and aspen (3- 15 years old) provide cover and protection from predators as well as lots of food opportunities, from the tree buds and catkins to an abundance of insects.

Heather described the project as involving a pattern of six patches this year, followed by a new set of clear cuts in neighboring locations five years later. Then, another set of cuts next to those after another five years have passed. The result will be a mix of forest age classes, many composed of aspen and alder. While other stands of older hemlock will be left in place to age toward a mature or climax forest.

As the pictures suggest, this requires some heavy equipment. What the Ruffed Grouse Society has called their Habitat Machine is designed to take down most of the smaller trees and shrubs, turning them into a woody mulch. The bulldozer-like machine has a whirling drum of big metal teeth mounted on the front

that grinds down everything in its path. The sound is deafening.

Why cut everything? While some individual trees may be left behind, the goal is to open up large areas to the sun. The open sunny conditions are necessary to allow the alder and aspen to regenerate. As Heather pointed out, aspen sprout from their roots and alder sprout from their small stumps densely and prolifically – if they get the sun. When that sun shines in, these trees can be well on their way within a few years, reforming that very dense young forest.

The primary purpose of all this work is to enhance forest diversity, encouraging a diversity of tree species as well as a diversity of forest age classes. That’s one path to maintaining a diversity of forest habitats supporting a wide variety of wildlife. Heather and Eric encourage forest land owners to work with a certified forester to develop a management plan. That plan might include selective logging for profit, but might also include improvement to wildlife habitat.

As we ended our interview, I asked Eric and Heather what they thought of a recent research report from 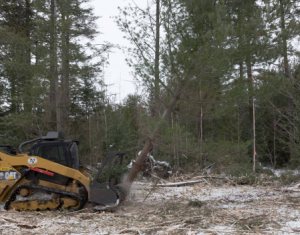 the U.S. Forest Service that says on-going climate change threatens the continued viability of birch-aspen-alder forest complexes throughout Lower Michigan. Eric pointed out that this type of habitat is essential to preserve some of Michigan’s favorite and iconic birds like woodcock, ruffed grouse and many warblers. And that’s why this work has to continue, even in the face of climate change. Diversity of all kinds will give us the best chance of adapting to the change that are coming.

Before ending this short report, I need to note that Michigan’s forests remain a work-in-progress. It wasn’t all that long ago, as forests go, that European settlers cut almost all the trees across the state. After that first cut in the mid to late 1800’s, additional cuts have been made. Some foresters seem to be encouraging selective cuts every decade or so. When I look around, I can’t find a fully mature or climax forest, except in isolated places.

As Eric and Heather pointed out, Michigan is short on young forest habitat. So it appears we lack diversity at both ends of the age spectrum. Apparently, gaining diversity in age classes will require careful management and lots of restraint.

Help us keep the stories coming by making a tax-deductible donation of any size!